Posted on January 7, 2013 by Richard Grainger

London Scottish grab the headline this week with a storming 26-23 win over Bedford Blues at the Athletic Ground.

Bedford, who started 2013 in second place behind the Falcons and had only lost to Newcastle and Bristol in the Championship before Saturday, had no answer to the Exiles’ power and pace. 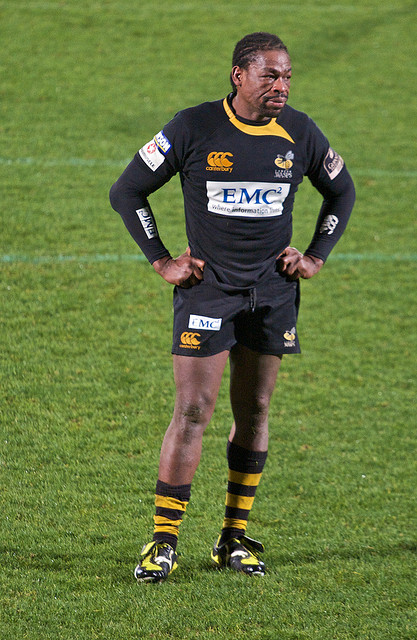 A revitalized Scottish side who have clearly benefitted from the coaching input of James Buckland and Serge Betson, were 17-3 ahead at one point, and looked to be running away with it before the Blues staged a late comeback.

The Exiles scored two first half tries though Andy Reay and Tyler Hotson with James Love converting both and adding four penalties. The Blues responded after the break with two Josh Bassett tries, converted by James Pritchard, who also added three penalties.

Bedford felt they should have had a penalty from which they could have left Richmond with honours even, when replacement Darryl Veenendaal was high-tackled, but referee Mr John Meredith thought otherwise.

But the Exiles had to play with 14 men for 20 minutes when first Jim Thompson and then replacement PJ Gidlow were sent to the bin; this underlines how impressive the their performance really was.

This win lifts Scottish away from immediate relegation worries and into ninth place, nine points ahead of bottom-placed Doncaster. If they can maintain their renaissance begun at Kingston Park before Christmas, they may well entertain thoughts of claiming the fourth spot in the play-offs.

The side who currently occupy that spot are Leeds, whose topsy-turvy season has not been helped by becoming itinerants while their Headingley pitch was re-laid.

The object was to transform the surface from a quagmire into a hard surface to suit their running style, but questions were asked as to whether it had been money had been well spent after their first outing on Sunday.

The re-laid Headingley pitch — all cut up

Although Leeds ran in four tries to defeat Plymouth Albion 34-16, the new turf cut up to such an extent that referee Mr Matthew Carley felt he had no option other than to go to uncontested scrums after only 16 minutes.

Carnegie scored three first half tries through Dominic Barrow, David Doherty and Josh Griffin, but had to wait until the final minute for skipper and Man of the Match Jacob Rowan to cross the whitewash and secure the bonus point.

Rory Clegg, on loan from Harlequins, capped his maiden outing for Leeds with a flawless kicking record on his 23rd birthday, notching four conversions and two penalties.

Leeds, who lost to Jersey in their last Championship outing, will need to show much more consistency if they are to hold onto fourth place and make the play-offs.

Jersey lost for the sixth consecutive time on the road against relegation rivals Moseley at Billesley Common on Saturday.

However, despite being 23-9 behind with 12 minutes to go, they managed to stage a comeback and salvaged a losing bonus point.

Charlie Hayter, Stefan Thorp and Ben Pienaar scored tries to put the Midlanders into a commanding position and in the hunt for a bonus point.

However, Jersey never gave up and forced the home side into an error-strewn three-minute passage, which resulted in tries for Nicky Griffiths on the counter-attack, and a charge-down grounded by skipper Nathan Hannay.

Neither coach sang too loudly about their side’s performance, particularly Jersey’s director of rugby, Ben

Harvey, who felt his team had lacked intensity in the first half, and criticized their complacency.

The final match to complete round 13 was at Clifton Lane on Saturday where Rotherham conceded a staggering 24 points in eight minutes to lose 12-32 to Nottingham.

The Titans were in control leading 12-4 following Garry Law’s fourth penalty, when scrum-half Charlie Mulchrone was yellow-carded in the 73rd minute.

The visitors blitzed Rotherham with tries from skipper Brent Wilson, Andy Forsyth and a fine solo effort from Alex Lewington in the final minute to earn them an unlikely bonus point. Then in injury time, James Arlidge added his second penalty.

However the Green and Whites’ new coach Alex Codling refused to be downbeat, giving his men ten out of ten for effort.

The next two weeks sees a return to the final pool matches in the British & Irish Cup.

Care to share?
This entry was posted in Rugby Posts. Bookmark the permalink.