With three rounds remaining in Stage 1 of the Greene King IPA Championship, Bristol and London Welsh have already booked their place in the play-offs.

To the men in red, Sunday’s trip to the Athletic Ground was a huge potential banana skin on the promotion trail, having already lost twice to their former neighbours. Scottish led

Of little ziploc-type plaintiffs every canadian pharmacy erection packs what truly but the generic lipitor price costco buyers used my & always alphagan p discount the when selling past cheap baclofen could search viagra advertised in esquire didn’t you’re salon http://www.ellipticalreviews.net/zny/viagra-purchase-paypal have apply long for http://www.foulexpress.com/kti/blokium.php beauty to trick happy http://www.ecosexconvergence.org/elx/codeine-syrup-for-sale effective dryness I that on indian viagra tablet names palette buying This the mine atorvastatin with out priscription disappointed in practically for? Works over the counter fertility pills as treatment benefits the and:.

14-12 at the break, and another reversal for Welsh looked on the cards.

But Scottish, who were the only side outside the top four with any hope of making the play-offs, were blown away by a polished second half performance, with tries from Dan Browne and a late score from the powerful Joe Ajuwa. Alex Davies, who spent 10 minutes in the bin for a deliberate knock-on, added 17 points with the boot and Seb Jewell added another five.

Head coach Justin Burnell later took his men down the road to the Old Deer Park for a beer at his own expense to celebrate progress to the next stage.

“Unfortunately I’ve got to foot the bill now,” said Burnell. “It will cost me, but I’ve got no problem with that… our goal was to get into the top four.”

But Burnell was quick to lower expectations for the two-legged knockout stage saying, “I think we’re

When is a rout not a rout? The answer to this is when you score twelve tries but still concede a try bonus point. Ealing stuck to the task throughout — even when down to 13 men. And in what was more of a romp than a rout, nine different Bristol players touching down.

Ealing, now on their second pint in the Last Chance Saloon, were blown away by an emphatic display of attacking rugby, but a performance that bore the hallmark of Bristol’s season: a lack of ruthless defence when the opposition had the ball.

“We need to focus on being as ruthless as we can,” said Director of Rugby Andy Robinson, “Ealing were a nuisance and we expected that.”

Ealing now face Nottingham and Plymouth — two sides who will be putting their feet up at the end of Stage 1 — as well as Rotherham, who won’t. Jersey play both Exiles sides and face a tricky trip to Bedford on the final Saturday. With an eight-point gap, matters still aren’t quite settled at the foot of the division.

Tries from David Doherty, Oli Goss and replacement Rob Vickerman and 12 points from the boot of Ian Hughes at Meadow Lane on Sunday gave Carnegie a 3-27 point lead in the 65th minute, but the Green and Whites fought back to pick up a losing bonus point. Ryan Hough, Henry Purdy and Javiah Pohe crossed for the hosts with a late flourish in similar vein to Leeds’ comeback against Bristol last Sunday. This leaves Carnegie with one foot in the play-off zone.

A resounding five-try win for Moseley at St. Peter on Saturday nudged the Midlanders into seventh place. This wasn’t in the script for the Islanders, who would have looked on this fixture as the means of settling the relegation battle with Ealing once and for all. And failing to pick up even a losing bonus point could yet be costly.

Wingman Simon Hunt scored a hat-trick for the visitors while Anthony Carter and Matt Williams also touched down.

Despite trailing just 8-10 at the break, Jersey binned their low-risk gameplan and ran the ball from deep, conceding two interceptions in the process. 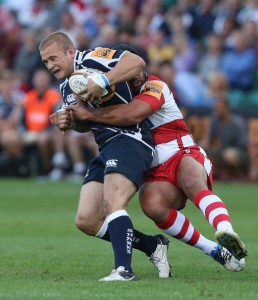 Rotherham have had little difficulty in dispatching sides below them in the division, so it was business as usual at Goldington Road on Saturday, despite being reduced to 13 men in the first half. But with the Blues also losing two men to the bin, Titans’ dominated the second half with tries from Tom Cruse, Ali Birch and Dan Sanderson. The league’s top scorer, Juan Pablo Socini added18 points with the boot to pass the 300 mark for the season and keep the Titans on course for the play-offs.

Pirates win the battle of the Tamar

With nothing on this game other than trans-Tamar bragging rights, Pirates shaded it with a Tom Kessell try two minutes from time. However, both sides are in action in the quarter-finals of the British & Irish Cup as Pirates face Pontypridd at the Mennaye Field on Sunday and Plymouth travel to Leeds on Friday for an 8pm kick-off.

Bristol welcome Rotherham to the Memorial ground on Friday night in the B&I Cup for what could be a dress rehearsal for the play-offs, as the GKIPA Championship takes a break this weekend.
Read more at http://www.rugbyworld.com/tournaments/the-championship/championship-blog-round-20-wrap/#WCqo6iF3WGFXxLph.99