There’s an old saying that there are two certainties in life: death and taxes, but now there appears to be a third: that Bristol will implode, come the final quarter of a game they’ve totally dominated.

The Sky cameras captured a rare smile that lit up Director of Rugby Andy Robinson’s face in the 64rd minute, at a packed Memorial Stadium on Friday night, as Ben Mosses dotted down Bristol’s bonus point try, with the Exiles yet to move the scoreboard.

But fifteen minutes later, the smile had turned to a scowl as Welsh hit back to finish within five points of the hosts and eclipse an outstanding Bristol performance with some late brilliance of their own. Had this been the first leg of the final, Welsh head coach Justin Burrell would have been happier than Robinson with the outcome.

London Welsh assistant coach Ollie Smith certainly thought so saying, “When we looked after the ball and got through the phases we scored tries — unfortunately it took us 65 minutes to do that.”

One has to question Bristol’s tactics; building a score was always Robinson’s pragmatic hallmark when coaching England and latterly Scotland. To turn down kickable chances against sides in the basement of the division is all very well but surely fallacy against a team with the best defensive record in the league?

To emphasise this, Bristol kicked to the corner four times only for Welsh to turn them over on each occasion.

Mitch Eadie — man of the match

Robinson would argue that the tries did come; first before the break when George Watkins crossed on the right flank, then in the second period when Mosses scored a brace and Man of the Match Mitch Eadie finished off Luke Baldwin’s tap-and-go.

But when Welsh hit back in the final ten minutes with two tries from Joe Ajuwa and one from Chris Cook, Robinson conceded tactical reversal on two fronts: Nicky Robinson’s shot at goal helped to restore an 11 point lead, and with the tank on empty, the bench was called upon to shore up Bristol’s flagging defence.  Fly-half Robinson, who was two from five on the night, is no metronome with the boot, and this could yet cost Bristol an Aviva Premiership place.

The Bristol pack was dominant throughout, albeit with some curious interpretations of the scrum laws by referee Mr Luke Pearce.

But it was Welsh — who had flanker Richard Thorpe sent off in the 78th minute for repeatedly punching an opponent — who had the last word, both on and off the pitch: “We’ll come out of this knowing that the Memorial Stadium is not a place to fear,” added Smith. He could well be proved right.

It was a case of catching the Bristol ‘yips’ for Carnegie who dominated another possible play-off scenario at Sheffield’s Abbeydale ground on Saturday evening — until the final 10 minutes.

The Titans, who have yet to beat a side above them in the division, and don’t look like 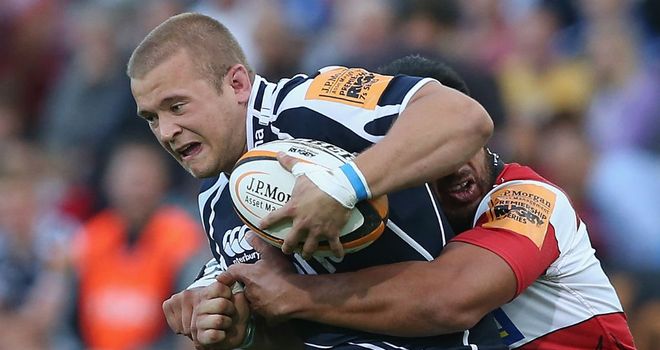 Jamie Boadley — a brace of tries in the last four minutes

doing so either, were much more soundly beaten than the score suggests. But two tries from Jamie Broadley in the last four minutes helped to coat a fairly inept performance with a veneer of respectability.

To be fair, Rotherham had to call in hooker Johnny Matthews, who normally turns out for National Two club Sedgley Park, and their lineout was a shambles. However, head coach Lee Blackett refused to point the finger saying, “It would be wrong to blame hooker Johnny Matthews because Leeds have the best defending lineout in the league.

Despite the late wobble, Carnegie never looked back from a 0-24 interval lead and are well placed for the knock-out stages.

A last minute try from a driving maul involving 14 Ealing players allowed Trailfinders to step outside the Last Chance saloon and dare to contemplate a second season of GKIPA Championship rugby.

Ed Siggery’s second try, converted by Ben Ward, not only turned a 21-19 deficit into a 21-26 win, but brought up an invaluable bonus point to give his side a two-point cushion.

Then, news from St Peter that London Scottish had defeated Jersey 17-25, denying the hosts a losing bonus-point, made the west Londoners trip home sweeter still.

But if Ealing lose to Rotherham, who won 79-9 at Clifton lane in September, and Jersey can beat Bedford at Goldington Road on Saturday, then this will count for nothing, as it will be the Islanders who will stay afloat.

Bedford beat the Cornish Pirates 48-36 in a vastly entertaining 14-try romp at Goldington Road while Nottingham and Moseley’s encounter at Meadow Lane on Saturday produced four tries a-piece, with the Green and Whites winning 29-24.