Time to say a word or two about the locals.

Remember the Men At Work song:

“Do you come from a land down under

Where women glow and men chunder”?

Let’s make a couple of changes here… update it a little:

“… where women jog constantly/take outdoor boxacise classes, consume nothing but skinny lattes, and men (even those over 30) travel by skateboard, wear factor 30 and moisturize.”

Doesn’t really cut it, does it?

The Whistle Blower — Sunday morning menace of the Manly streets

Sunday morning and I’m awakened by a curious whistling coming from the street below. A bleary-eyed glance at my phone informed me that it was 7.45. Who the f***ing hell lets a child wander the neighbourhood blowing a whistle at this god-forsaken time of day?

I am about to vent my spleen from the balcony when I notice that the offender is a teenaged girl in a day-glo jacket pulling a cart containing Sunday papers for which a steady stream of my neighbours rush from their front doors to buy.

Everyone, of course — even on a cool, cloudy morning — has been up since dawn’s first rays… jogging, surfing, doing Tai Chi, skate-boarding, cycling, wrestling sharks and of course slapping on copious amounts of factor 30 and moisturizer. And drinking skinny lattes.

The Stepford/Manly Wives, calorie counting and jogging with their buggies as if their lives depend on it, while the Stepford/Manly husbands swim in schools of merchant bankers across the shark-infested bay, or race ferries on their kayaks, on their days off.

But beneath all this fervent activity lies a curious mix of quasi-puritanical order and a refreshingly candid way of telling it as it is, almost childlike in simplicity.

Let me give you a couple of examples:

You cannot sun-bathe topless in public (if you’re a Sheila, obviously) and I recently saw a notice outside our apartment block highlighting the by-law which states that it is an offence to leave your shoes outside. 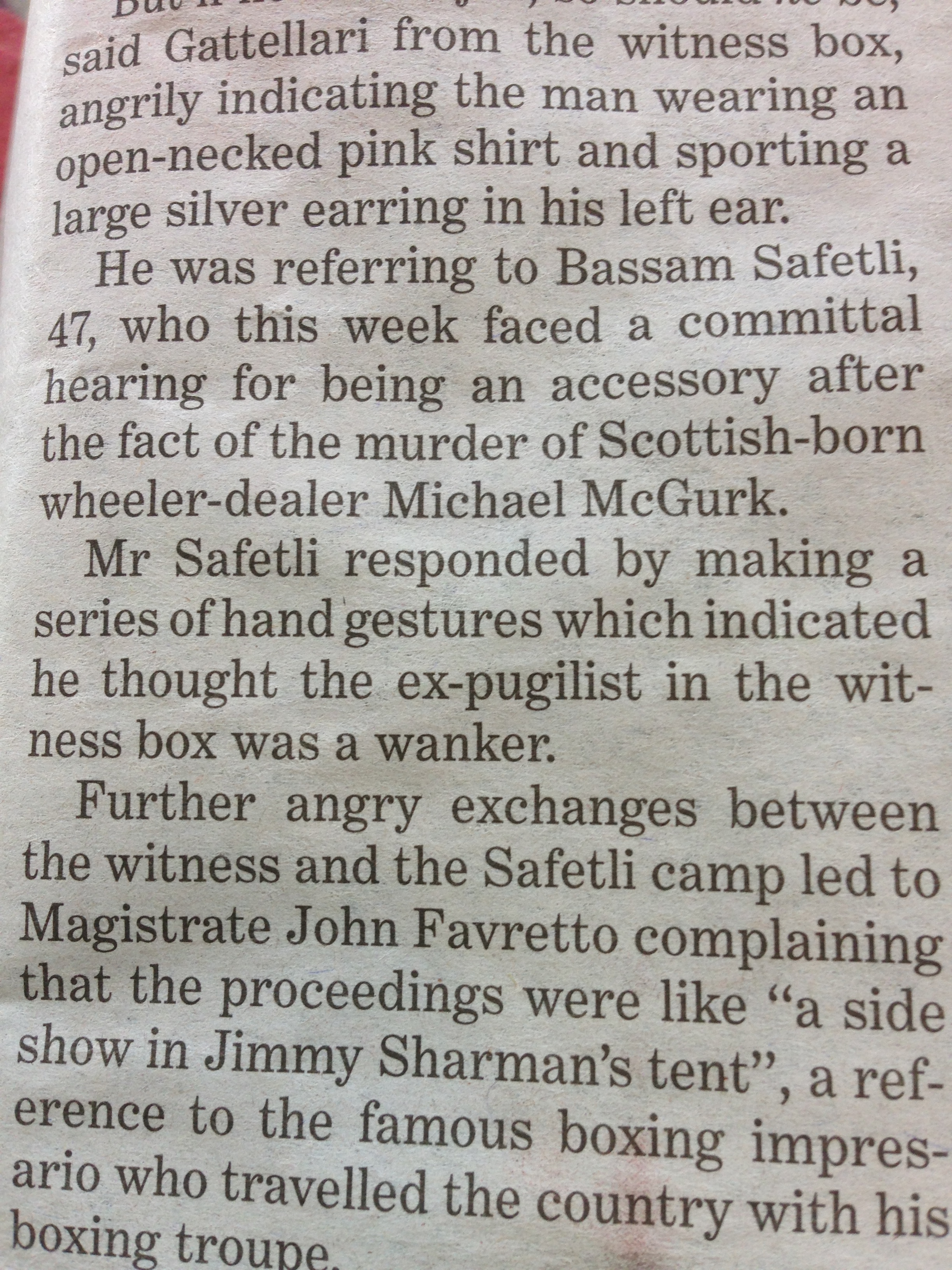 Mr Safetli — an even-handed response from the dock

On the other hand, a court report I found in yesterday’s Sydney Daily Telegraph, said: “… Mr Safetli responded by making a series of hand gestures which indicated he thought the ex-pugilist in the witness box was a wanker.”

And here’s another thing…

Everyone here is white, from Anglo-Saxon heritage and has been here for precisely 20 years.

All the Aboriginals (who didn’t die from smallpox when Cookie bowled up around 230 years ago) have gone inland to wrestle red-backs and drink themselves to death on guild-ridden government handouts. A few of them make art for the white man to sell on the George Street market, but in the main they are left to their own devices in the outback; out of sight, out of mind, out of back.

And here’s another urban myth exposed: no one drinks Foster any more.

Time for a jog and a skinny latte.

Care to share?
This entry was posted in Blog and tagged Australia, fitness, jogging, sharks, swimming. Bookmark the permalink.