Posted on February 12, 2014 by Richard Grainger

With just two matches to go in the pool stages of the British & Irish Cup only two groups look to be decided, while for nine clubs the campaign is as good as over. And with all but three GKIPA Championship clubs still in the hunt, it looks like being another vintage Cup season for the English second tier.

Leinster A Lead the way 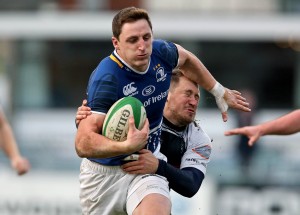 The 2012 finalists were no match for the holders who registered another five-pointer on Saturday. Cross Keys, strengthened by several Dragons not required for the trip to Bordeaux in the Amlin Cup, were just a point adrift at the break. But Leinster’s superior fitness in atrocious conditions yielded second-half tries from Adam Byrne and Leo Auva’a while the Welshmen only had a penalty from Italian international fly-half Kris Burton to show for their efforts.

This leaves Leinster ten points clear from their four wins in Pool 1 and almost certain to progress.

Pontypridd remain at the top of Pool 2 despite losing to London Scottish in this Christmas cracker at the Athletic Ground on Saturday. The Exiles looked to be in control when Miles Mantella touched down for the bonus point to give Scottish a 26-14 lead. But with eight minutes to go Thomas Young, the son of Wasps’ boss Dai, burst clear to bring the visitors within five points and set up a close finish.

London Welsh were made to work for their bonus point win against the amateurs of Edinburgh Academical on Saturday. The Accies, who had been thumped 73-10 at the Old Deer Park last weekend, were only 0-7 behind at the break and it wasn’t until they ran out of steam in the final quarter and conceded two late tries for the visitors to finish 7-33 in front. This leaves the Accies pointless but each of the other three sides still have ambition to progress from Pool 2.

Bedford bounce back with bonus point

The Blues well and truly avenged their loss in Galway last week by notching the bonus point in the first half at Goldington Road on Saturday. Bedford’s forwards coach Martin Hynes, delighted with the Blues’ most proficient performance this season said: “We had the reaction today that we wanted.”

Rotherham remain two points ahead of the Blues in Pool 3 by virtue of a 20-15 win over Llanelli on Saturday. The Titans led 13-3 at the break but had to dig deep to see off a fierce fightback by the visitors.

Albion lost for the first time in this year’s competition, going down 23-8 in a scrappy affair at the Waterford RSC on Friday night. But Plymouth head coach James Shanahan felt that inconsistent refereeing did his side no favours: “We created two very good chances. One was pulled back for a forward pass, and for the second when Munster knocked on the referee didn’t play advantage.”

Pool 4 is wide open as Nottingham‘s 24-14 win over Stirling County on Friday night leaves them just three points behind the two front-runners.

Carnegie’s 21-17 loss in their first Cup outing may well cost them qualification despite thrashing Aberavon 72-0 at Headingley on Saturday. But they have their destiny in their hands as unbeaten Bristol, who defeated Gala 6-17 on Saturday to lead Pool 5 by two points, have yet to make the trip to Yorkshire.

The Cornish Pirates did the double over Jersey with a bonus point 24-0 win at St Peter on Saturday and are the only side in the competition with maximum points. In the other game in Pool 6, Ulster Ravens, who still have a mathematical chance to progress by virtue of being one of the two best runners-up, ran in six tries to beat Ayr 38-21 in Belfast and gain revenge for a 41-22 defeat in Scotland last week.

And finally, this weekend sees a return to GKIPA action. The one to watch will be third-placed London Scottish’s who take on their neighbours, Welsh in the televised clash at the Kassam. The 65th meeting between these two great rugby institutions kicks off at 2.30pm.