UNDERSTANDING SPAIN — The Power of Porsche and a Right Good Reunion

Posted on October 5, 2016 by Richard Grainger

Reader warning — this blog is pretty much all about cars, so if you’re not a petrolhead, look away now!

I bought it, of course.

I flew back to Spain last night and the first thing I did this morning was to take my GTS (Sophia) out for a drive.

You see, since Saturday, when I read every web review of the new 718 on the train to London, I’ve had this nagging feeling that I’m about to swap automotive perfection for something… well… not quite so good.

The 718 is a fine automobile, but Evo (whose opinions I generally concur with) doesn’t like it. Autocar are very guarded with their praise, and consider that the Boxster (although it’s no longer called a Boxster) has lost its soul. Purists, they say, will have their heads in their hands. Most of the other motoring mags share this concern while praising Porsche for the tweaks that have made this iconic car… err… gentler on the environment, with lower CO2 emissions and improved fuel economy.

So what’s different? Well it’s out with the naturally aspirated flat-sixes we know and love, and in with a pair of brand-new flat-four turbos.

And the general feeling in the motoring media is that, while the car is much quicker — we’re talking 0-60 and 0-100 times brisker than the standard 911 here — and the steering, balance, styling and poise are all significantly improved — as well as making the world a safer place to live in — the one thing that has made the Boxster stand head and shoulders above all other mid-engined sports cars in this price bracket has gone.

And this, I have to admit, is a big worry.

Okay — I hear you say — haven’t you got more important things to worry about… you know, like starving babies in Africa, the world ending shortly after Donald Duck gets into the White House, or even Brexit? And of course the answer is yes.

But — at the risk of sounding totally shallow — the burble from Sophia’s tailpipes turns more heads in Puerto Banus than any number of Ferraris, Lambos or even Bugattis. The sound of the naturally aspirated flat-six is simply awesome.

And this was my initial response to the salesman during my test drive in the 718:

He goes with a smirk, ‘Well… what do you think?’

‘I can’t hear the engine,’ I reply. ‘Please tell me this isn’t an electric car?’

So even with the optional sports exhaust, the sport Chrono Package and the Sports suspension PASM and the Porsche Torque Vectoring (I know… it sounds like something out of Despicable Me) options ticked, I’m still not sure if I’m going to be hankering for the return of Sophia, come December.

And here’s another thing — the deal I was offered by Porsche Wilmslow was just that little bit too good.

You know how it works, the trade-in value for your car is usually about half what you paid for it two years ago. But I paid £55k for Sophia eighteen months ago and was offered… 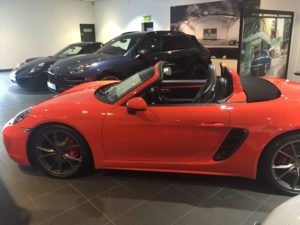 Orange — no colour for old men

Not only that, to park my arse in the orange 718S — the one I thought was red — was going to cost me £62,500 and not the whopping £78k that this wonderfully spec-ed car changed hands for a few months ago. Or I could have the black demonstrator, with three thousands miles on the clock, and almost everything on the options list ticked, for as little as £60k.

This isn’t the Porsche Wilmslow I know — where overpaid footballers walk in and pay the asking price in cash for whatever’s good to go, and where salesmen keep you waiting until they’ve finished their conversations and smoked salmon sandwiches.

No… they desperately want to sell these cars, and this got me wondering. What if the 718 is not actually as good as they say it is? What if it’s the Emperor’s New Clothes?

The marketing rhetoric has been carefully choreographed: the four-pot is born from the DNA of the great 60s’ Formula 2 racing models, and of course the flat-four fuel injected air-cooled 914 — a model that old-sold the 911 with over 118,000 units worldwide.

The 718 badge comes from the sports-racing 718, a development of the successful 550A, and was raced at Le Mans by legends such as Stirling Moss and Graham Hill. A 718 RS 60 won the Sebring 12 hours and the Targa Florio in 1960.

‘The Little Bastard’ — but was Dean at the wheel… or was it Dean Martin?

But I have problems by the narrative spiel I’m fed by the Porsche sales team — it was James Dean who was associated with the Porsche brand — not Dean Martin.

Oh… and one other minor factual inaccuracy from the good folk at Porsche Wilmslow: James Dean died in ‘The Little Bastard’, which was a 550 Spyder, and although he did own a 718 for a short time, he was not in one when he collided with Donald Turnupseed on 30th September 1955.

Anyway, the upshot of all this is that I’ve placed an order for a new 718S to be delivered in December. So I’m hoping that it will be one birthday and Christmas present that won’t disappoint.

What about the orange one, I hear you ask?

I would have gone for it but my girlfriend said a categorical ‘no.’

She goes, ‘It’s a colour for a small boy and you are not a small boy.’

And so on to something that definitely didn’t disappoint, the impromptu Borough Road college reunion, last Saturday. 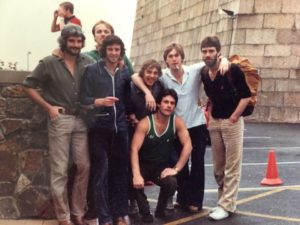 Back in the day — didn’t we have a lovely time that day we went to… Jersey?

My cynicism was misplaced as there was a healthy turnout of six members of the magnificent ’77 entry cohort.

Much black liquid was consumed in the Orange Tree in Richmond, followed by copious amount of Liffey water at London Welsh where the backdrop to our reminiscences saw Jersey defeated by the hosts.

The Greene King IPA Championship is a very long way from where the Exiles had been in the years preceding the Magnificent Six’s entry to Borough Road. In the mid-70s, their starting line-up boasted seven of the ’71 British & Irish Lions who caned the All Blacks in their own backyard.

But perhaps, having found the Aviva Premiership too hot a kitchen to cook in, they are now where they should be; more importantly they are back at the Old Deer Park.

Nigel Rees, one of our party, knows more about the Dark Days of the early ‘90s then most. Reesey, a former Borough Road, Llanelli and Welsh Schools’ outside half, captained the club and took over as coach following the departure of John Dawes as Director of Rugby in ’93 — perhaps the club’s darkest year. 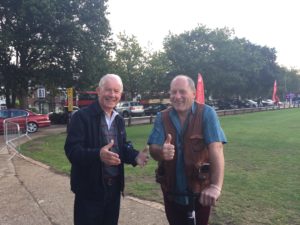 But the highlight of the day was the appearance of that Rugby legend Johnny Hunter, former Borough Road lecturer and London Irish Head Coach — the man who persuaded me to turn by back on a hugely profitable family business, enroll at Borough Road and become a teacher.

Hunter quotes — such as ‘… get that bunch of bleedin’ canaries off this bleedin’  pitch! (in response to a yellow-shirted soccer team crossing the in-goal area of the Hallowed Turf) and songs — such as ‘My Way’ and ‘Who Killed Cock Robin?’ are the stuff of folklore, and it was simply tremendous to find him in such fine fettle.

But being in or about to enter our 60s, the party fizzled and popped until around seven when, one by one, we sloped off to the tube instead of the toilet.

By the way, was there anything left in the kitty guys?

Well, that’s about it for today, chicos. It’s another cloudless day in Marbs and the temperature is now a much more bearable twenty-eight degrees.